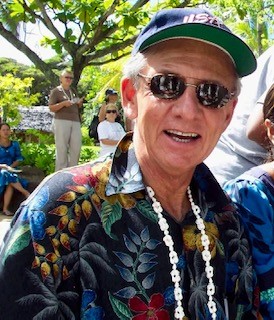 Victor E. Morin made his transition from this world on October 5, 2022, after a long battle with Parkinson’s disease.  He was born November 22, 1943, in Oklahoma City to the late Raymond and Dorothy Morin.  Vic was a 1961 graduate of Northwest Classen High School in Oklahoma City.  He attended Oklahoma State University, where he pledged Lambda Chi Alpha.  He eventually graduated in 1967 from the University of Central Oklahoma.  He was employed by 3M for several years before venturing into other areas of sales and owning a few of his own businesses.  He served his country in the National Guard.

Vic enjoyed snow skiing and sailing, as well as building and remodeling homes.  He loved to travel.  He was creative and artistic.  Vic was so clever and quick-witted he could solve any problem he was presented.  He enjoyed his service to Christ United Methodist-Plano.  Much pleasure came from working on the House on the Corner; attending the PACE Sunday School class; participating in the Active Older Adult exercise classes; and participating in mission trips, the Men’s Service Group, and the Vision of Light Team (VOLT).  He was very social and enjoyed being surrounded by his family and friends.

Survivors are his wife Linda, his daughter Keari Girvin and husband Shane, his sister Lynne Morin Davis, and his blended family members Kristin Jackson and Geoff Jackson and wife Paige.  Grandchildren are Spencer Lawson and wife A.J., Connor Lawson, Shannon Newton and husband Cody, Danielle Girvin, Hannah Nichols, Katie Nichols, Lindsey Jackson, Taylor Jackson, and Sarah Bass.  He also has four great-grandchildren: Hunter Lawson, Baylor and Breelynn Newton, and Mason Bass.  Vic’s smile and love for life will be greatly missed by all of his family and many friends.

In lieu of flowers, the family asks that donations be made to either the Christ United Men’s Service Group or to VOLT.  Checks may be written to Christ United Methodist, with the name of the mission designated in the “memo” line.